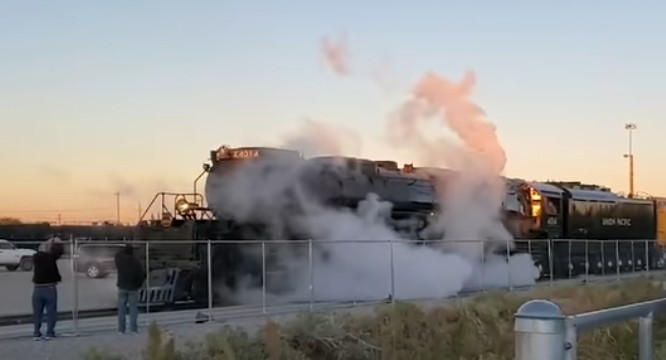 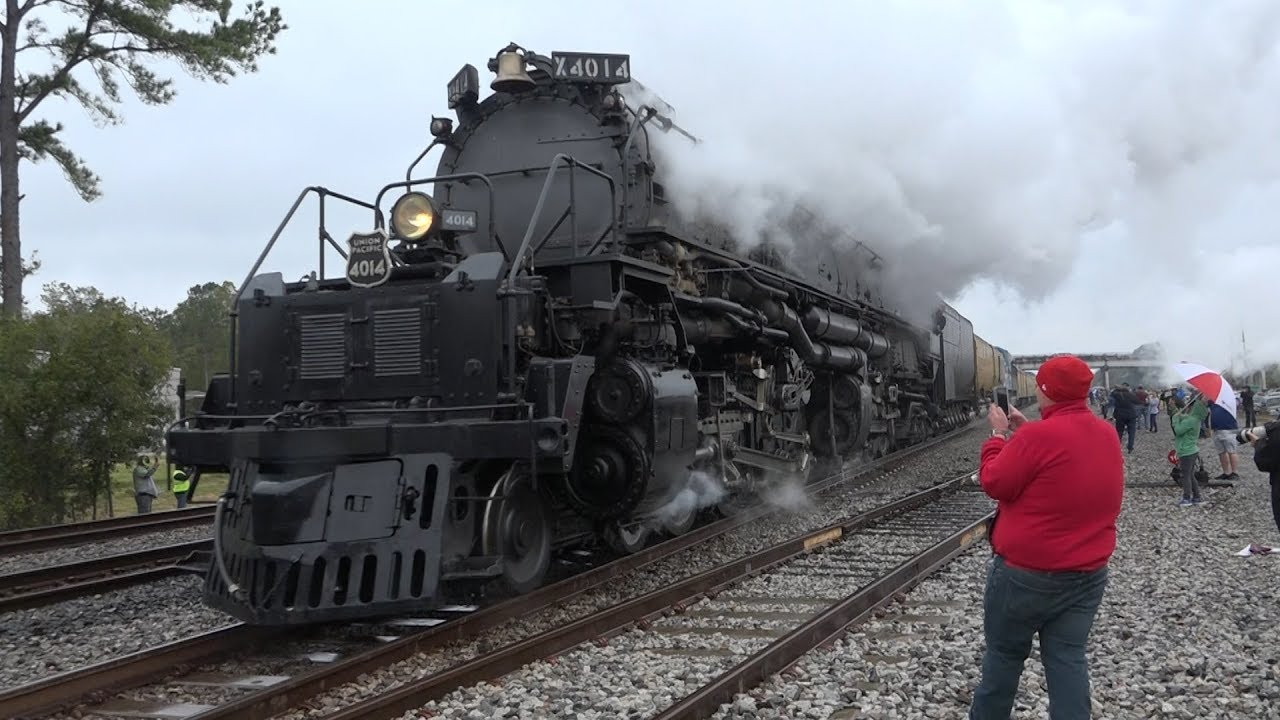 This image of Big Boy 4014 entering Spring, Texas on November 8, 2019, links to the Union Pacific web site explaining it's significance and historic trip around America. Click the above picture and get the story, engine specifications, schedule, and other important information.

The Big Boy steam locomotive, Union Pacific 4014, is making a run across America this year (2019). We wanted to see it in San Antonio, but thought large crowds might prevent an up-close experience. Then we discovered it would stop at the Elm Street crossing in Spring, Texas, while we visited a mere eight minutes north. Serendipity.

It was raining lightly on the morning of November 8, 2019, but the drive down I 45 was easy, and all went as planned until near the Elm Street crossing. Cars lined both sides of the road starting about two miles out. Traffic crawled past the place where Google Street View had shown potential parking outside the Cross Track Icehouse. With no hope of getting that close I went down West Hardy Road, paralleling the railroad tracks, heading south toward Houston. The strings of parked vehicles went with me, crowded together on grass and gravel beside the pavement.

Eventually, I gave up and turned onto East Louetta Road, heading back to the freeway. A parking spot appeared. I pulled in and climbed an embankment to the perfect vantage point, right on the tracks, amid a lightly scattered crowd. The rain lessened, and, thankfully, the train was a few minutes late. No word but "fate" suffices.

This image of the Big Boy entering Spring, Texas links to the page devoted to the Big Boy class of locomotives on the Rail Giants Train Museum website. Great train-effect mp3.

I took some practice shots with my camera, and ran a short video of the crowd to make sure everything was working. Before long, here came the Big Boy. It was visible about a mile off, bordered beneath a nearby overpass, steam pouring sublimely into the sky. I framed it on my phone, pressed the button and watched it all the way down to my position, turning as it passed, and tracking it all the way north to the switch below Elm Street. The experience was more than I'd hoped for, the magnificent machine rumbling by, the steam descending to enshroud me, and the cars clattering past like an articulated phantom from ages auld lang syne. I clicked off the video, walked to my car, and drove back up to The Woodlands.

An hour later, I learned the truth. My camera had been in snapshot mode, not video. I got one picture of the engine approaching from the far south, and another of it disappearing to the north. My only video showed a few seconds of the crowd. I'd been undone by wearing the wrong glasses, which made guesswork of the controls. 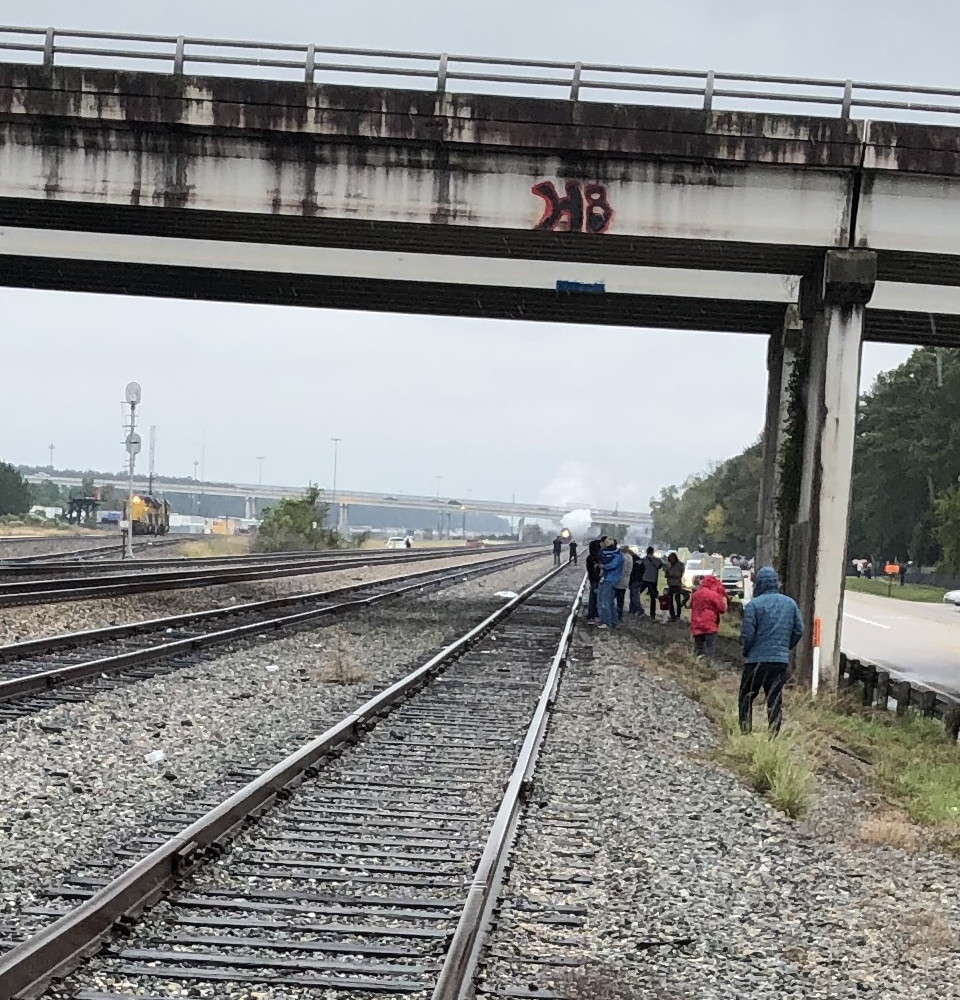 This is what I thought the beginning of my video would look like. 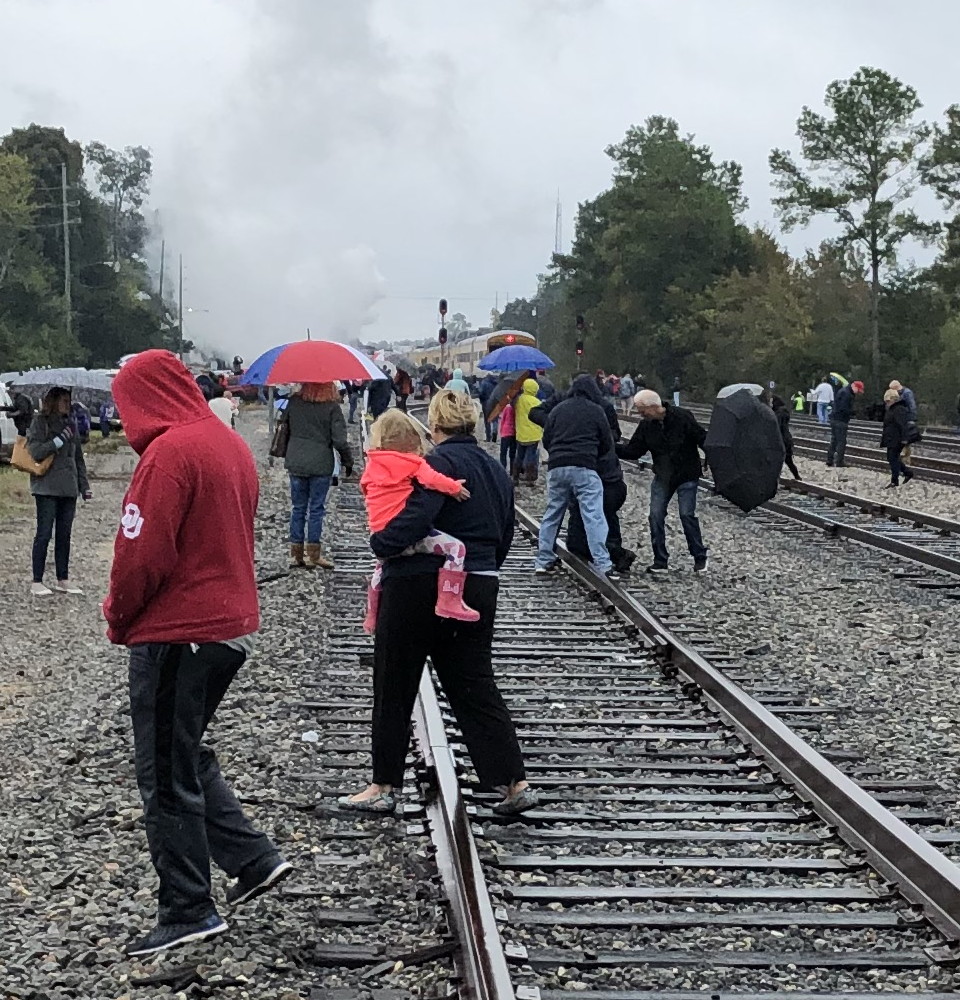 I believed I was stopping the video at this point.

That was disappointing, but I've been rescued. Youtube videos, successfully made by those who didn't poke the wrong buttons, show the spectacle I witnessed. My video would have been better, I'm sure, but these viewable videos show something mine couldn’t have. Me. I've collected on this page three videos that show not only the storied train passing my position, but me earnestly, futilely, trying to capture the moment. I've also included some links that place the train historically, plus a few more Spring, Texas videos. 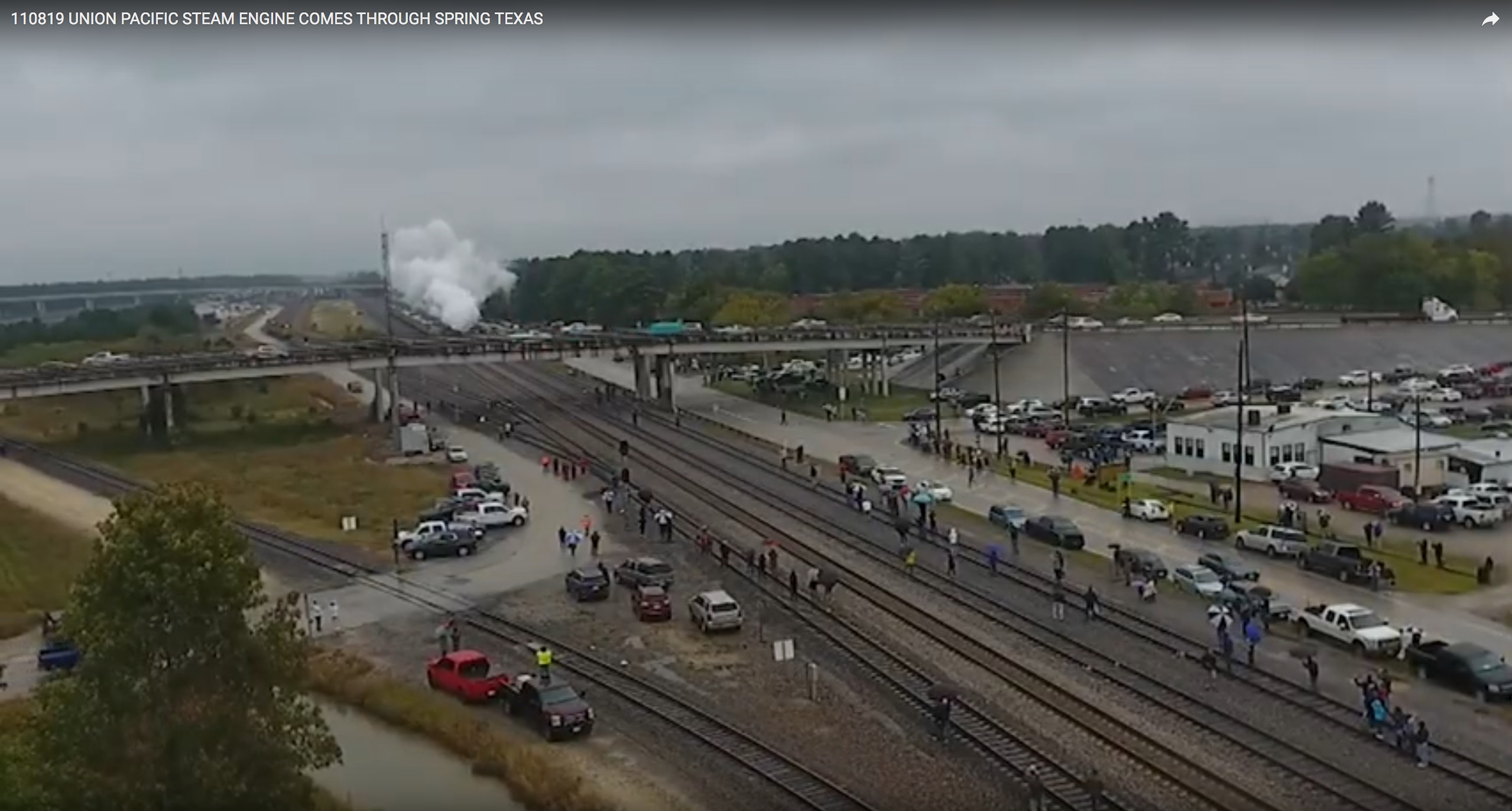 Whoever took this video captured a panoramic view of my location as the Big Boy rolled by. I am visible near the center of the image, right side of the rightmost tracks, wearing a beige jacket and black cap, near the last pickup in a string of parked cars.

Herewith and hereafter, a collection of images and videos from Spring, Texas, and around the country. Please note, a click on the banner at the top of this page will tell the story of why the train consist (the cars in the train) included a locomotive enscribed with the name of George H. W. Bush, 41st president. Clicking the picture below the banner will show a Youtube video of the trip from El Paso to Houston, just before the stop in Spring.

The first three videos below show Big Boy's passage through the spot where I was standing, and record my futile attempt to get my own video.

The person making this video was standing on the other side of the tracks, opposite me. They capture the approach of the locomotive toward the Louetta Road and West Hardy Road intersection. As the train passes our position, they swing the view to their right, and I appear briefly at about time 1:20, still believing I am preserving the moment on my camera.

This person stood south of my location, beneath the overpass south of the Louetta Road turnoff. This is a great example of what I was hoping to capture with my video, and at the end, as the camera swings north to follow the departing Big Boy, I appear, fully believing I'm getting a great video.

This seems to be a composite of at least two different video captures, but from the same time. There must have been two cameras involved. The first segment, with a red-coated man in the foreground, seems to be north of my position. I believe the overpass near me is in the background. The second segment, starting about 0:23, appears to be from a drone. It shows a panorama of the Louetta Road turnoff, West Hardy Road running north and south, and the overpass crossing the tracks to the south. I am the tan speck near the center of the frame on the west (right) side of the tracks. Behind me is a reddish pickup truck at the end of a string of parked cars. Across from me is the person taking one of the videos that captured me, and beneath the overpass is the other. This video provides a very good look at the entire train. Just as the train passes my position the drone shifts away and glides up the track to follow. It captures Big Boy taking the west side of the Y, headed toward College Station. Then the drone heads back south showing the crowds and traffic.

The person taking this video is standing about where I'd planned on standing, at the Elm Street Crossing in Spring, Texas, across the street from the Cross Track Icehouse, if only I'd arrived a few hours earlier.

This video appears to be from just south of the Louetta Road turnoff where I found my parking spot. I believe we can see the overpass to my south at the end of the video. Great capture of the passing train, and nice whistle sound. Almost like being there.

This video may be from the interval between Houston and Spring, where the tracks parallel the freeway and the speed was a little faster. Not a great capture of the consist, but a good feeling for the weather and pedestrian daring.

This video might have been taken from atop an overpass south of my position. Great view of the train approaching and passing underneath.

Pulling away from Spring, Texas. 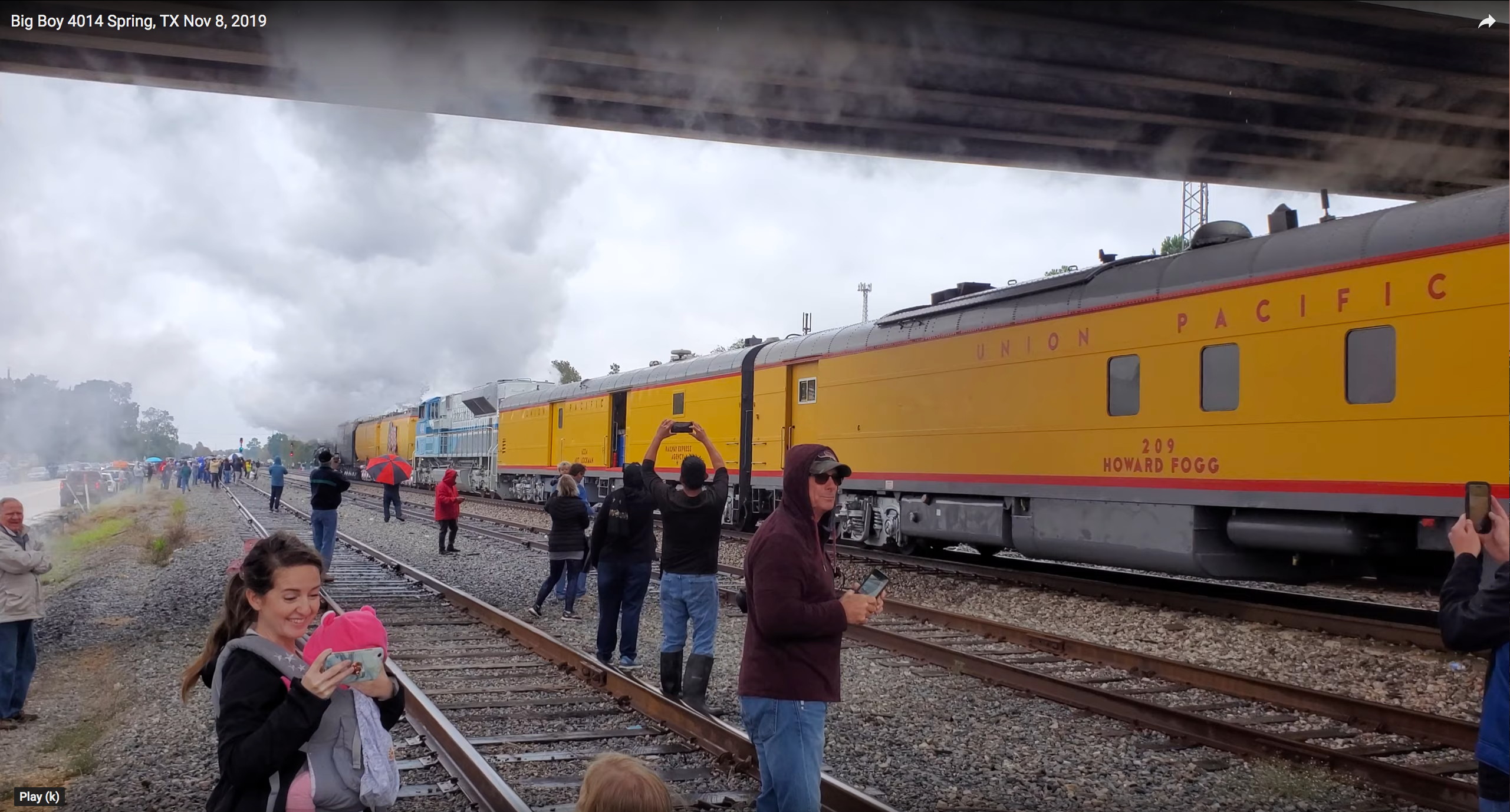 Here's where I thought I was getting a great shot of the engine, showing the crew admiring the crowds. That's me in the beige jacket and black cap, in the far background, outside the leftmost rail, first person at the far end of a long gap of viewers. 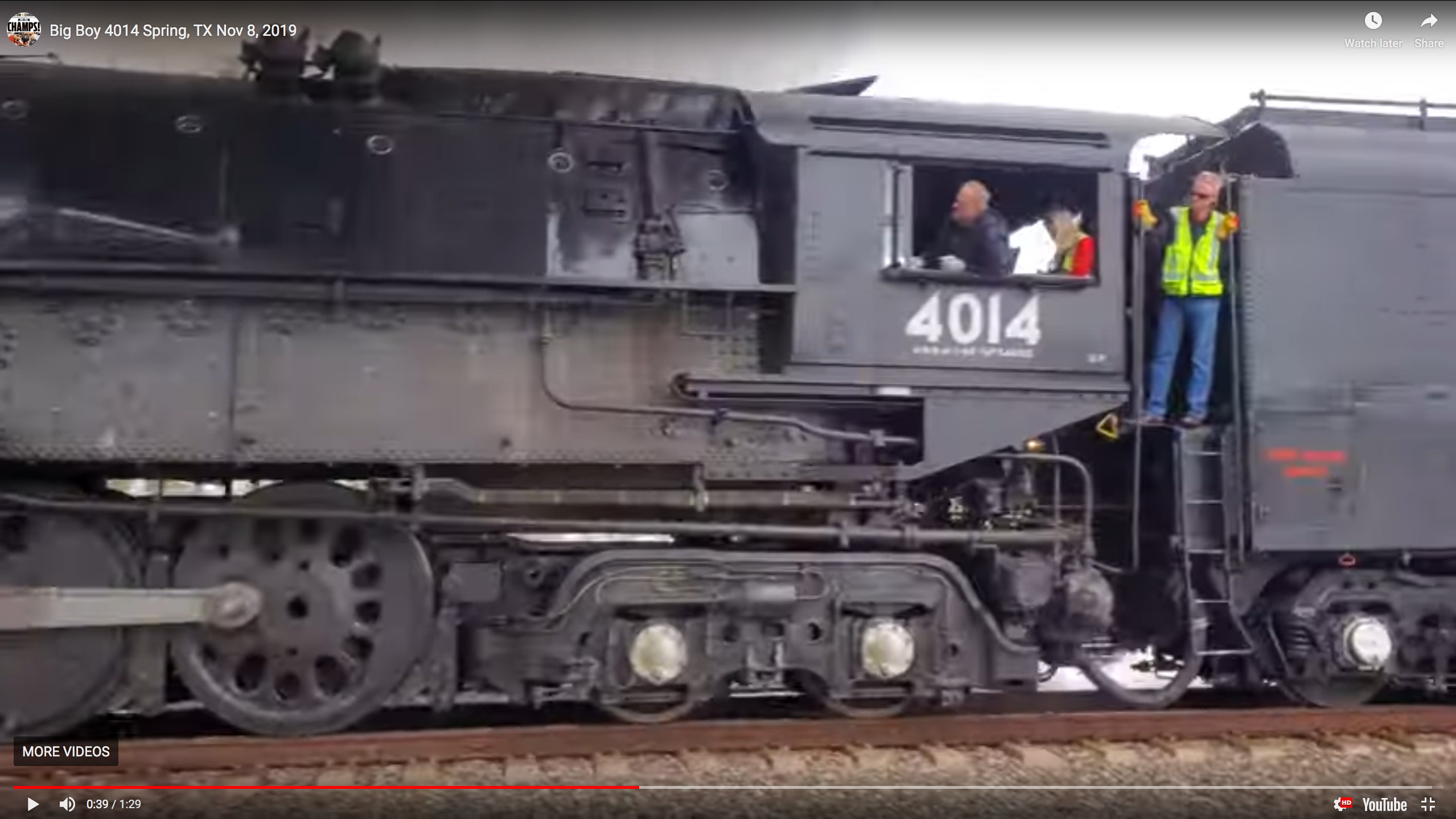 And here's what I saw when the engine passed me. 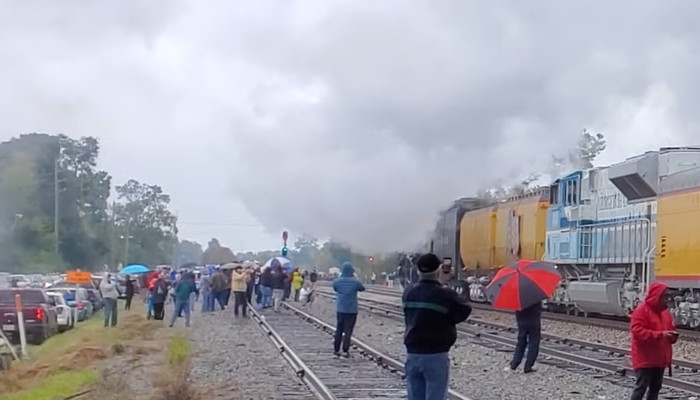 And there I am, beige coat, left foot touching the left track, taking my perfect video, just as the 4141 Locomotive with the Air Force One livery passes in front of me. It was by far the best video I've seen. Too bad I'm the only one who will ever see it..

Who in the world cares about Big Boy?