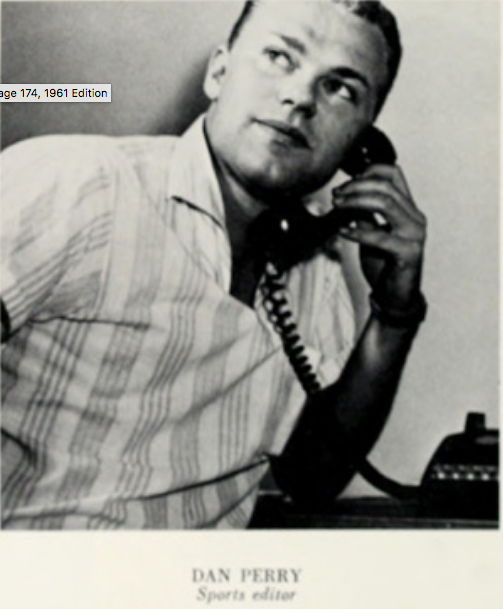 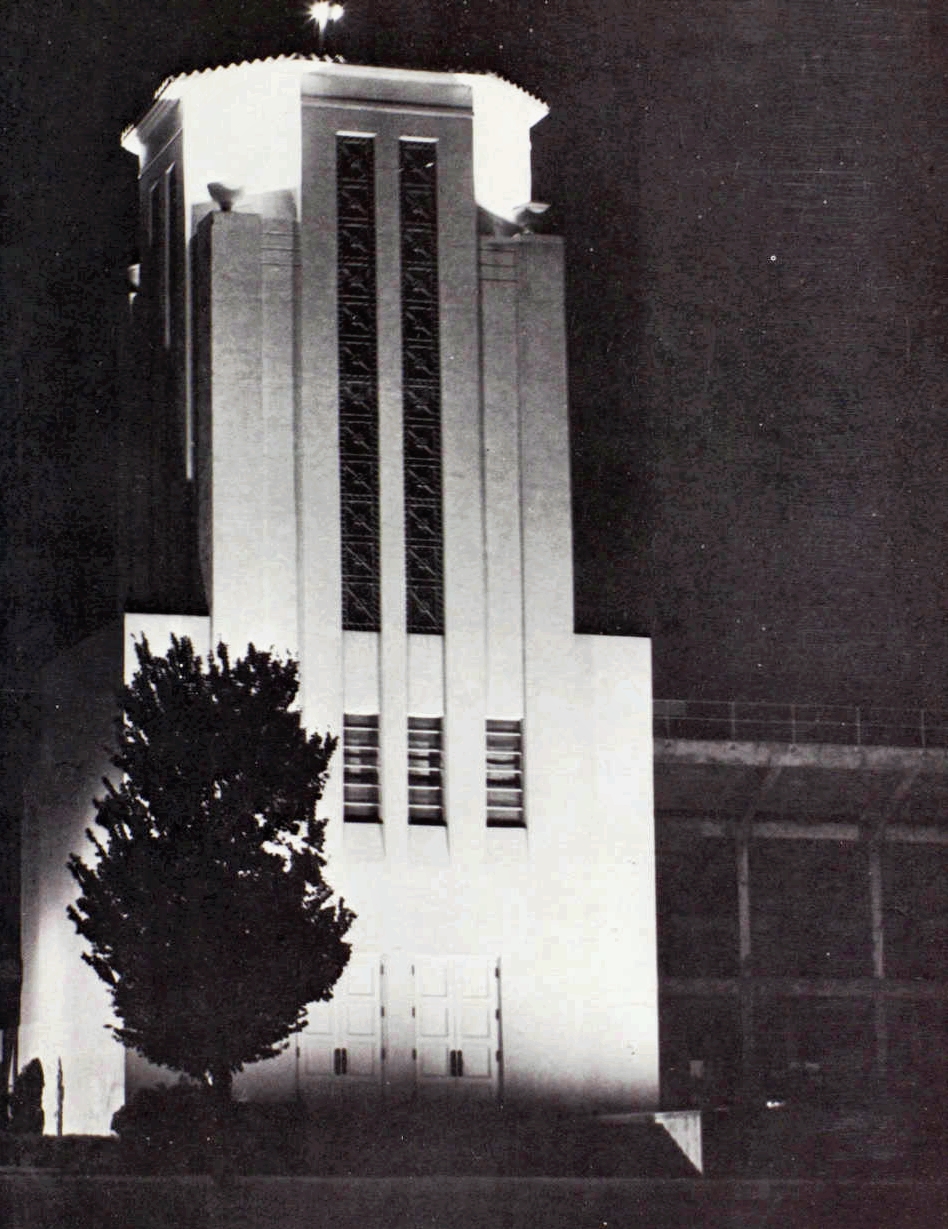 “I’m getting into that game, come Hell or high water.” The campus-cred older brother of a fellow freshman led us from Garcia Hall toward Aggie Memorial Stadium, September 10, 1960. Student ID’s hadn’t been issued yet, and admission into the stands of Quesenberry Field was uncertain. Exactly how we got in is lost in misplaced memory, perhaps through a hole in the fence, more likely by bluffing our way through the gate, but enter we did to see the New Mexico State Aggies skunk the Pumas from Mexico City, 41 to nada. An international football game, being our first college sports experience, was accepted as normal. Indeed, the entire undefeated Aggie season seemed, to precedent-lacking freshmen, the natural order of things. Perspective came later, turning memory into magic.

“Magic in the Desert,” by Dan Perry recounts the improbable perfect season of the 1960 New Mexico State Aggies football team, immortalizing its inconsonance with a long, lusterless Aggie football legacy. In 1960 the suddenly resplendent Aggies carried a four game winning streak from 1959 through an undefeated season of 11 victories, including a rare NMSU bowl appearance in the El Paso, Texas, Sun Bowl. Before, and mostly since that shining moment, the patient Aggies have known mostly football grief. The season of perfection is so extraordinary that the late Pervis Atkins, one of the team’s stars, always called it magic. Mr. Perry gives us the magician and his court.

Warren Woodson (1903-1998) coached football for 40 years at 6 different small colleges across the southwest. He probably didn’t invent the wing-T offense, but he perfected it, and combined it with a genius for talent, strategy and game-day tactics that provided him a 177-72-16 won-lost-tied record on coming to NMSU in 1958. He’d had 3 previous undefeated seasons. Talent seemed to blossom wherever he stood, like flowers around compost. The simile is crude but descriptive. Woodson is remembered as so sharply football focused that his personality projected aloof indifference. His success never got him hired at the larger, better-funded programs, perhaps by his own desire, but more likely because he lacked the political will to survive in the big-time bureaucracies of higher learning.

That single-minded focus was layered on bedrock principles about how to teach young men, and what kind of young men he wished to teach. Woodson had a degree in Bible as well as physical education, and his genius included a nose for talent. Charley Johnson was attending NMSU on a basketball scholarship, but in a single, walk-on tryout, Woodson spotted his starting quarterback. He recruited Pervis Atkins and Bob Gaiters from Oakland, aided by color-barrier restrictions on the school choices for such talented young men in 1960. Woodson didn't have show-boaters on his teams, and didn't invite any back from previous seasons. He stressed teamwork, and insisted that winning did not justify cheating. Decades later his players lauded him as the spirit behind the miracle, one of them saying, “Woodson was a very good coach, who we respected, and we expected him to lead us to victory.” 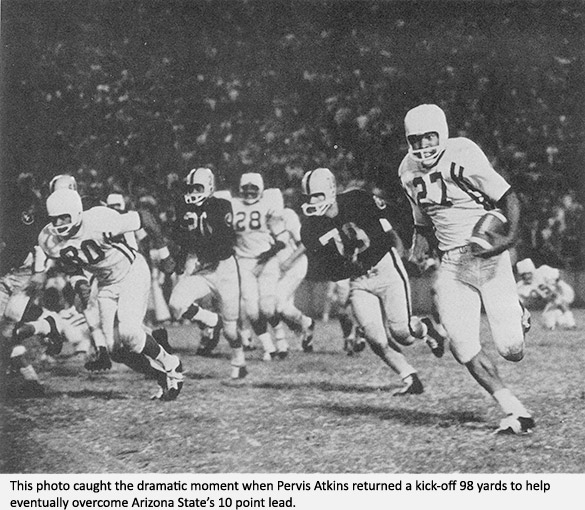 Woodson encouraged academic performance. Charley Johnson graduated with a 4.0 GPA in chemical engineering, and spent 15 years in the NFL, earning a PhD along the way. He eventually returned to, and retired from, his old alma mater as head of the NMSU Chemical Engineering department. Pervis Atkins had an NFL career and became an actor/producer in movies and TV. J. W. Witt earned a master’s degree and went on to a career in teaching and administration.

Woodson didn’t encourage specialization. Several players, among them stars like Pervis Atkins, played offense, defense and special teams. Atkins was famous for touchdowns on kick returns. Atkins, Gaiters and others shared the kicking duties. Even quarterback Charley Johnson sometimes played defense. The team was small by most standards, and diverse assignments were Woodson’s answer to depth requirements. There was always someone to step in.

Coach Woodson was popular on campus, as winners always are, but his colleagues sometimes wondered if a mere football game warranted all the fuss. Faculty grousing increased as victories decreased. “He has the distinction of getting two schools on probation at the same time,” was heard more than once. Although such criticism was often voiced in “dumb jock” clichés, it had nothing do with sports. During that same period Ralph Crouch, head of the math department, was aggressively building a power-house research team in the specialized field of abelian groups, a then popular mathematical concept. His increasing success was likewise greeted with snide asides from the jealous mediocrity.

We write memories into the organic stuff of our own path, and invest them with significance to our journey. That senior quoted in the opening line above, for example, denies any recollection of leading a gaggle of freshmen into the first game of the 1960 season. Rightly so. Our leader, whom my roommate later opined was a "BMOC," a designation I'd never heard before and which marked my roommate as a potential BMOC, was kind enough, or distracted enough, not to shoo us away. Now on the other side of a career in Rocket Science at White Sands Missile Range, Eddie Robinson has his own contribution to Aggies' folklore. It involves the game Dan Perry leads off his book with, the 27-24 victory over Arizona State University, October 29, 1960. Here's Mr. Robinson speaking to us again, half a century after getting us into Memorial Stadium.

"The Arizona State game at ASU wasn't described the way I have it burned in my memory. A carload of us traveled to Tempe for the game and stayed at the apartment of one of my old buddies, also from Carlsbad. I felt throughout the game that the Aggies would prevail, even though we trailed a lot. I only got worried when, very late in the game, we were ahead, time was running out, and ASU began driving the field. We stopped them at about our 40 on an interception by Bob Langford.

"Then our offense began, without Charlie Johnson, but with our backup QB Ricky Alba. The Aggies went into a pass formation, Ricky faded back to pass, and the ASU players, in defensive pass coverage, didn't even try getting through the line. Finally, Ricky just stopped moving, stood with his legs spread wide, and put the ball on his hip. He stood there for a short while before ASU realized they were wasting time, and started trying to get through the line. Then he started running around the backfield killing time. And we won!! We ran out of coke that night and had to drink our rum with Kool-Aid!

"I do also remember my freshman year, 1956, when the Aggies won only one game, against Nebraska Wesleyan, a church school. How juicy it was to end my college days with a 7-3 season in 1959, and the only unbeaten major college team in 1960. 1961 was a good year as were the next couple of years. Then Warren Woodson got too old, and they fired him."

Nebraska Wesleyan, by the way, had a wretched record in 1956, and NMSU seems to have been the only nationally recognized team they played. Some record keepers list it as Wesleyan's only game that year, but they managed to lose six other games to someone. Our correspondent's comments about beverages is amusing college lingo of the era. Alcohol, of course, was not allowed in the stadiums in those days.

Football was a low-priority that autumn for a perplexed freshman, intimidated by the academic and social requirements. Nevertheless I followed the team and attended the home games. Bob Gaiters was the national rushing champion. Pervis Atkins had won the title the year before, and seemed always to be the instrument of magic when magic was needed.

During a typical desperate play one heard, “He’s trapped, they’ve got him,” prompting the wiser reply, “Don’t bet on it! He can turn on a dime!” Out of a crowd burst Gaiters, or Atkins turning upfield at the near sideline with the authority of an express train. As the crowd noise calmed to a murmur, a young man with his shirttail hanging out rushed into the huddle. “Jackson’s in!” A crimson striped jersey streaked across the backfield to the rhythm of smashing bodies, and darted through the spot where the defensive guard should have been, 10,000 stomping feet affirming expectations met, excitement crackling to seemingly predictable heroics.

Charley Johnson was the calm center of the explosive band. His academic prowess inspired whispered legend, a football player who didn’t study and made straight As. My freshman physics class included half-a-dozen team members. I sat amongst them in the small lecture hall, and one of them, I think it might have been Jerry Gambatese, sat beside me, smiling and friendly and surprisingly supportive of a bewildered freshman. Whatever else these young men were, however talented and pressured, they were good people. Coach Woodson’s teams were populated with good people, because he seems to have tolerated nothing else.

Mr. Perry’s book gives us the history of Aggie’s football, before and after the undefeated season, along with his personal observations. All the games of the myth-like season are here. All the players are here. The dominant personalities are here. The feeling of the moment is here, a holographic, multi-dimensional freezing of the time and place. Unfortunately, the book was published posthumously, Mr. Perry not quite getting it finished. His career in journalism shows through the expressive prose in a voice reflecting his time, ethics and attitude. His old college roommates, themselves equally qualified in journalism, and demonstrating the Aggie team’s duty-centric norm of friendship and teamwork, finished the book and published it. We thank them for it, and we thank the late Mr. Perry for conceiving it.

If you want a glimpse of the better angels of our nature from an unexpected direction, get this book. It represents something longed for but seldom seen.

Spectacular events inspire tidal metaphors, tiny ripples of myriad countervailing cycles becoming giant tsunamis. We could think of the 1960 NMSU season that way, a century of Aggie football fortunes ebbing and flowing before rising up in a brief, violent spasm of excellence. Yes, the 1960 season was a coincidence of numerous individual currents: the arrestive career of coach Warren Woodson, the haphazard evolution of racial bigotry, the unlikely availability of heretofore unheralded heroes, and a mixture of political priorities that briefly allowed excellence to dominate, among many others. But the total exceeds the sum of these parts. The Aggie’s undefeated season was the side-slipping intrusion of an alternate universe. It was magic. Who in the world cares about the Aggies?