11th May 1961: Salesman Mike Dreschler has his motorised roller skates refuelled at a petrol station near Hartford, Connecticut. He has a single horsepower air-cooled engine strapped to his back and holds a clutch, accelerator and engine cut-off switch in his hand.

Mr. Drechsler was interviewed for a newspaper article in 1964.

The above picture, with caption, has popped up in social media posts since about 2012. The witticisms offered in response are usually translatable as "Oh my God," or "What an idiot." Very few commentators have asked the three obvious questions, "What's going on here?" "What is that contraption?" and "Where has the picture been since 1961?" 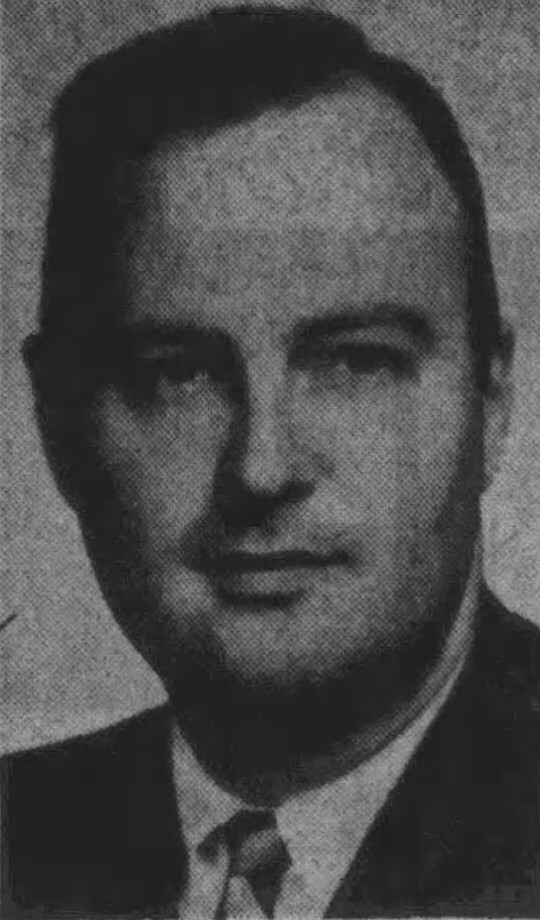 One commentator, Jeff Peek on the website "Hagerty," (click the title banner above) noticed the distinctly un-American tilt of the caption, "motorised" instead of "motorized," "refuelled" instead of "refueled," "petrol" instead of "gas," and "11th May 1961" instead of May 11, 1961." He was on to something when he mentioned the Motorized Roller Skate Company of Detroit. Here's the story.

Mike Drechsler, not "Dreschler," was born Michael Ellis Drechsler in Los Angeles, California, 21 December 1932. He attended Bergen Junior College, and the University of Connecticut where he met his future wife, Riva Feister. He was working for NBC by 1955, and in the Army from 1956 to 1958. Later he moved to West Hartford, Connecticut where he worked in radio for WNBC, and WRYM before becoming National Sales Manager for WDRC. After retirement he worked in real estate and remained active as a Life Member of the Auxiliary of Hebrew Health Care, the National Council of Jewish Women, and B'nai Brith. He passed away June 21, 2015. 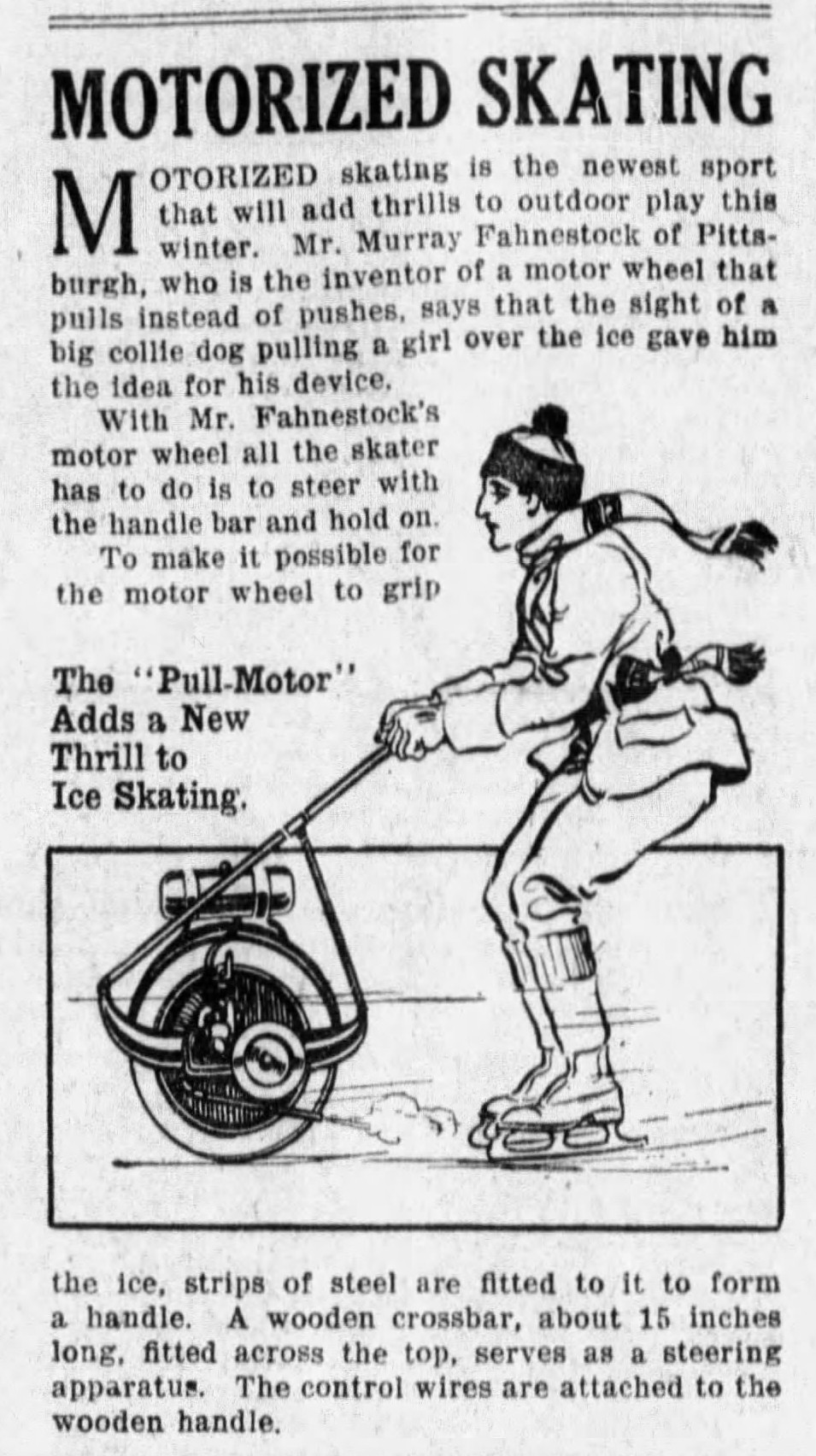 Motorized skating has inspired different images through the ages. Click to explore other scientific wonders of 1917.

How did Mr. Drechsler come to be standing at a filling station getting his skates refueled? A story in the Hartford Courant for May 3, 1964 (see nearby), titled "Portrait of a Time Salesman," explains all. By the way, a time salesman, in radio and TV, sells advertising time. You knew that. The story calls him "the most mechanized, transistorized, and gadgetized time salesman of our time." Mike explains, "Every adult is still a kid at heart….Who wouldn't want to ride on a pair of motorized roller skates?....These gadgets act as an ice breaker [for clients]." What did his wife Riva think of them? "She buys them for me." 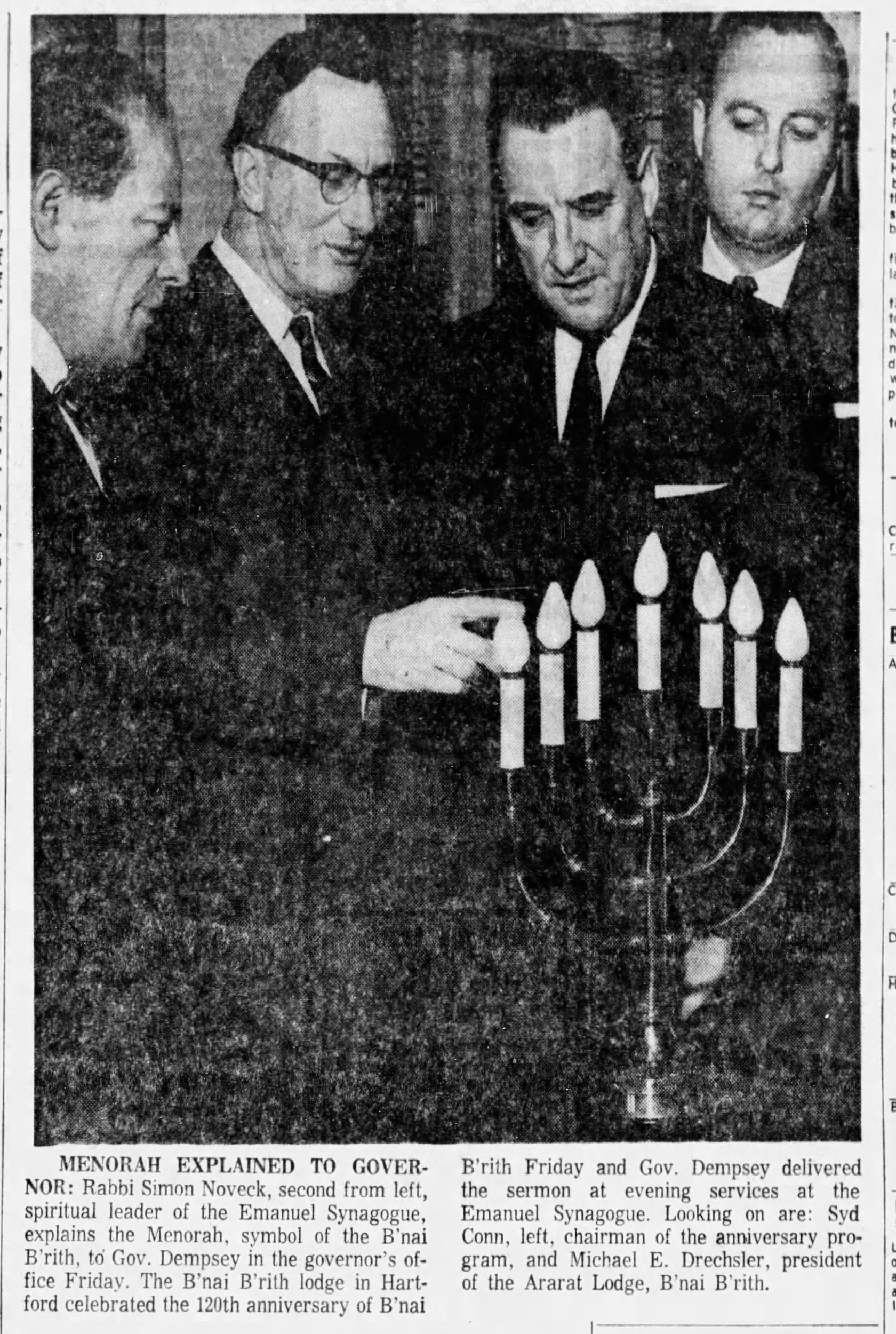 Mike shares recollections of his early days at the radio station in an online history page (click the title picture, above). There he discloses that sometime, probably early 1960s, he borrowed a NY Yankees uniform and rode his skates in a New Britain parade. Then, "We also put a model on the skates when a NYC photographer asked us to do something with the skates. His pictures of my "secretary" were published in the newspapers and magazines worldwide." We don't know the name of this photographer, and the pictures of the model haven't been confirmed, but we do know that the picture that started this enquiry, of Mike getting his "petrol tank" filled, is attributed to F. Roy Kemp.

F. Roy Kemp is a Canadian photographer, has authored a few collections of photographs, and has posted several, including our subject photo, in Getty Pictures, each with a caption in Canadian English, referring to auto bonnets and boots and petrol and with all those Commonwealth spellings. He is undoubtedly the author of the Mike Dreschler (sic) caption. He posted the now famous picture in 2012 (see nearby). All other social media postings derive from that moment. 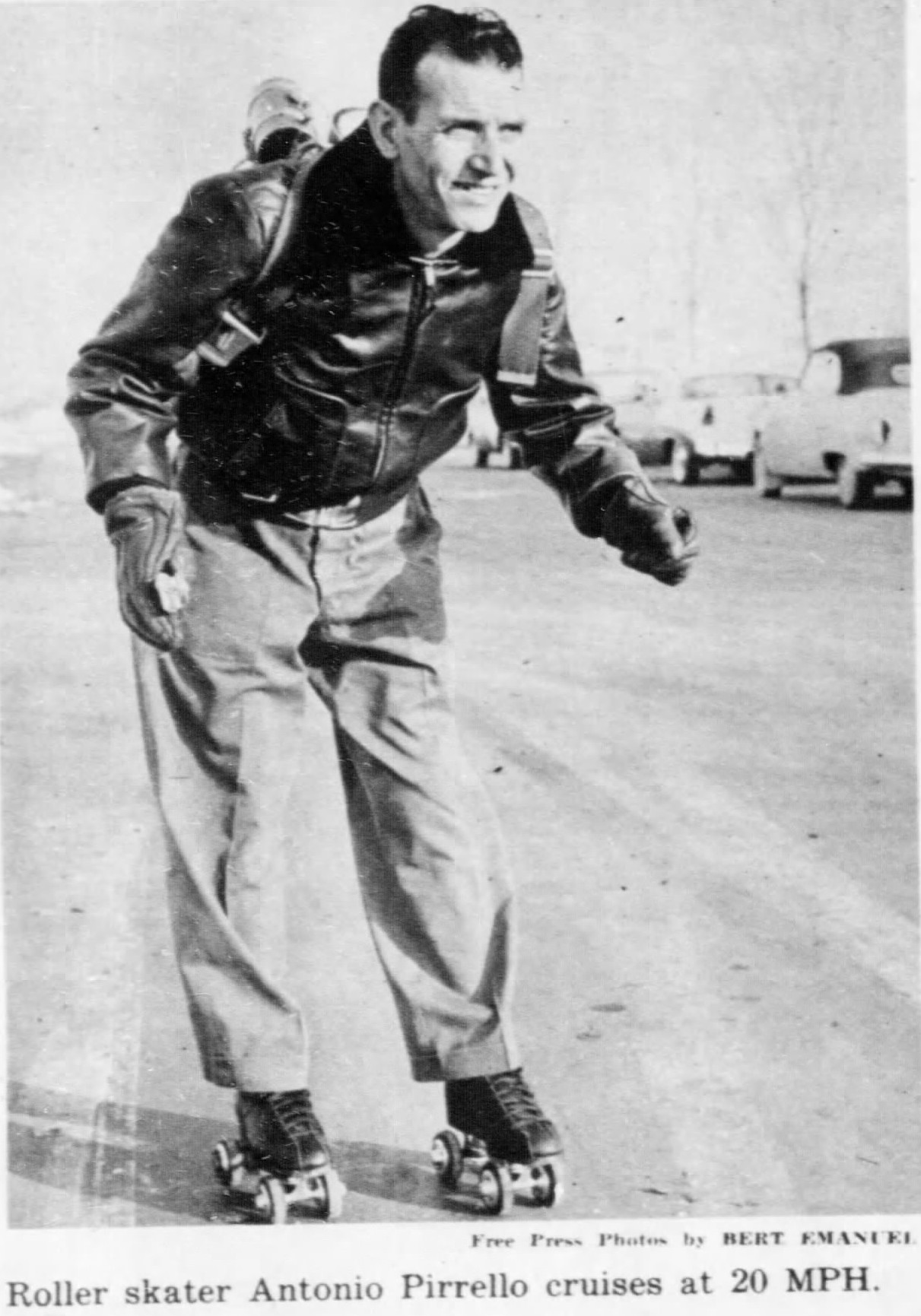 The picture links to an article in the December 16, 1956, Detroit Free Press.

Okay. That's Mike and the photographer, but what is that odd contraption apparently purchased by Mike's wife. That's where the Motorized Skate Company of Detroit comes in. It was founded in 1955 by an intractable inventor from Lincoln Park, Michigan, named Antonio Pirrello. Mr. Pirrello (29 March 1913-19 October 1997, residing in Wayne Michigan) registered a patent in 1955 for "Power Roller Skates," an invention he'd been working on for two years. Mr. Pirrello was the real deal. He sounds like the kind of guy my Dad would have loved knowing. Pirrello tried for several years to commercialize the skates. He got the weight of the engine down to under seventeen pounds. Some sources indicate he might have gotten it to nine or ten. Some too-clever social media wizards put his commercial failure down to not having thought of a way to stop the skates. This is evidently a conclusion drawn from the caption not mentioning a braking system. Read over some of the many postings of the picture. It's amazing how much misinformation can be deduced from that sparse caption. 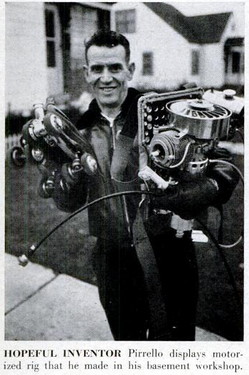 The picture links to a Life Magazine article of January 21, 1957.

In fact the braking mechanism was well understood by those that used the skates. One skate was powered by the engine, via a flexible drive shaft. That's the long line extending down Mike's back. The other skate was used for steering and braking, just the way any skater would steer and brake. It might not be efficient, and perhaps hard to control, but for heaven sakes, people dash down ice-slick mountainsides on skis. If you're not a skier check this out. Skis don't have brakes. By the way, one social media commentator gravely pronounces the mechanism defective because he assumes that line to be a high-pressure hose (evidently powering the skates by some sort of fluid drive???) and assures us it has been amateurishly taped up. He's looking apparently at the two white bands at about knee level. There's plenty to deplore in that picture, but I'm guessing the offending white strips are a drive-shaft extension splice for different sized users. Anyway, it's not something Pirrello or Drechsler slapped on as a kind of hobo repair. 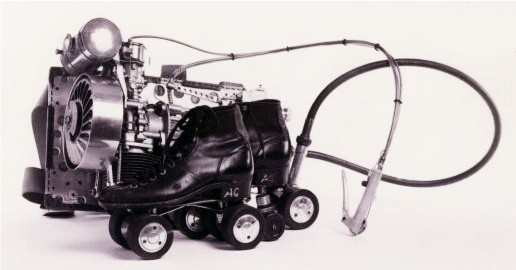 The picture links to a story about the drowning of Leonard Pirrello.

Mr. Pirrello was a veritable fount of mechanized creation. He tried for years to market the skates. He even wrangled a spot on the old TV show "You Asked For It." His nephew modeled the skates for the show, and tragically drowned in a boating accident just before the pre-taped segment aired. Several pair were sold, and they show up from time to time in museums and estate sales, but somehow they never caught on. Maybe it was the brakes after all. 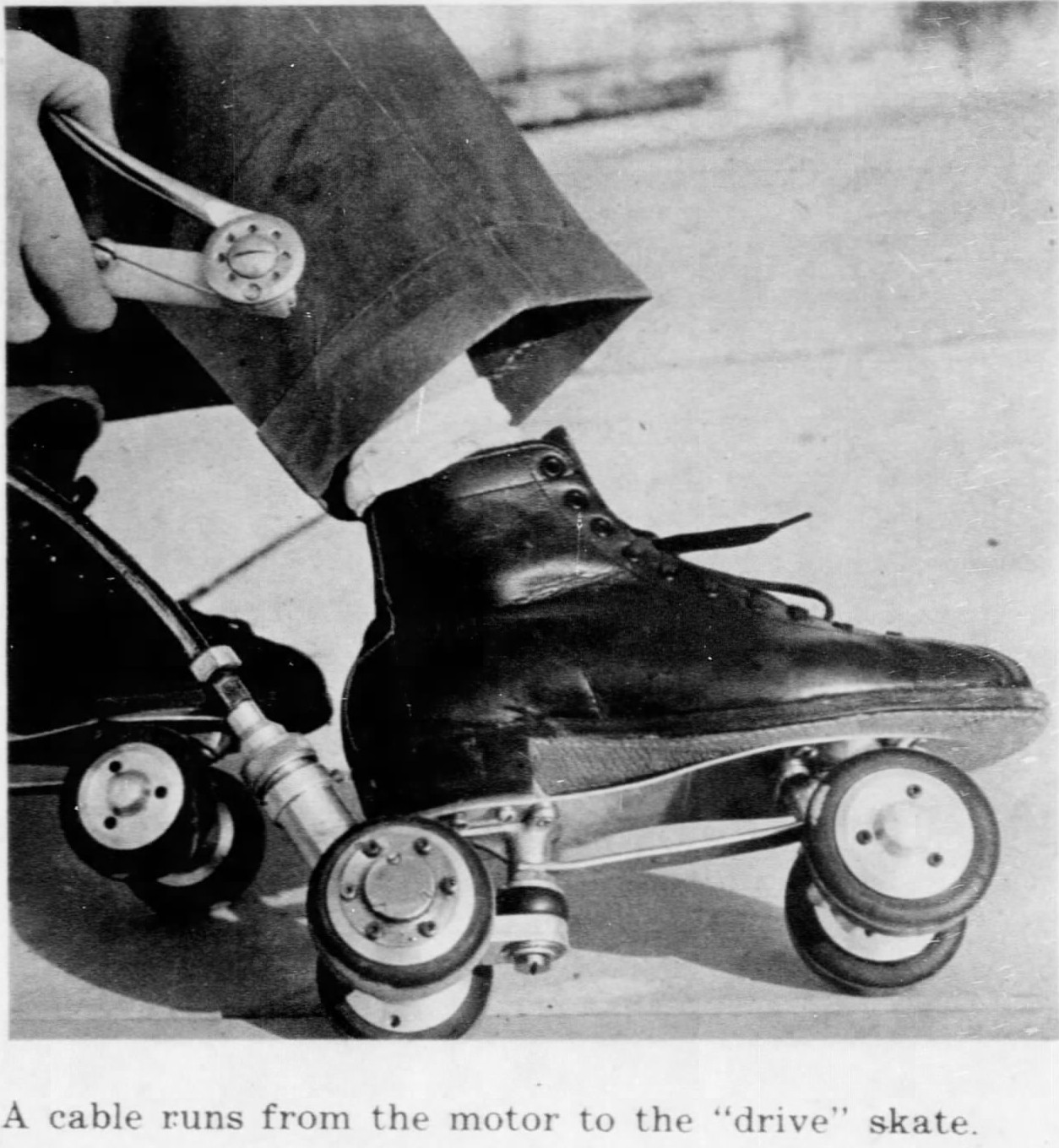 We've included a few of Pirrello's more notable ideas. There's the end-of-toilet-paper device; are you cringing? It employs a rotating turret spinning at 1000 rpm. If you want to know more, have a look at the nearby story. The remote auto starter was certainly ahead of its time. If you live north of the 40th parallel you recognize its worth on a winter day. In all he holds nine patents, including an improved bowling ball handle and a walker that converts to a chair. His miniature gasoline engine remains his favorite victory. His grandnephew Frank Pirrello joined him and modified the skates to work with an electric motor. They also tackled an inline skate project with a two-horse power gasoline engine attached to one of the skates. The mechanism gets up to 35 mph and retailed at $500. I wonder if they got one of Mike's relatives to try them out.

Yes, my dad would have found a kindred spirit in Antonio. Dad lived on a rocky outcropping of the old Permian beach front in southern New Mexico. My mother tried to grow a lawn, so Dad built her an edger. It sported a two horsepower gasoline engine, and a steel blade with tungsten carbide teeth. It could slice through concrete, and did when he ran over the sidewalk. It would also trench out a furrow through that Permian cement rock and kick up flat slabs of stone exposing fossils of flora and fauna for the first time in 300 million years. He and Antonio spoke the same language. 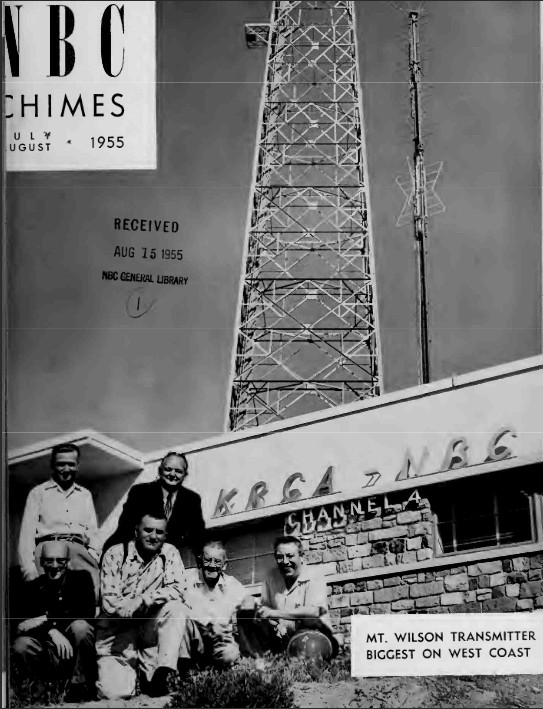 This image links a 1955 copy of the NBC Chimes magazine. The Drechslers marriage is announced on page 77.

These might be the pictures Mike Drechsler referred to involving a model. Is that Mike in the lower middle image? Click to enlarge.

Link to a history of motorized skates. This set of skates was donated to the Henry Ford Museum by Pirrello in 1985. It links to an article about the founding of the Motorized Skate Company. 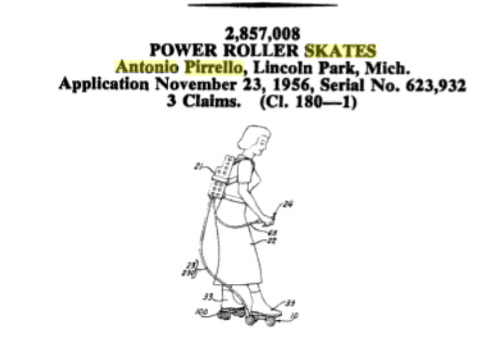 Antonio Pirrello filed for patent on his skates in 1956.

A Motor Home Blog shows us the National Roller Skate Museum. Guess whose invention is there. 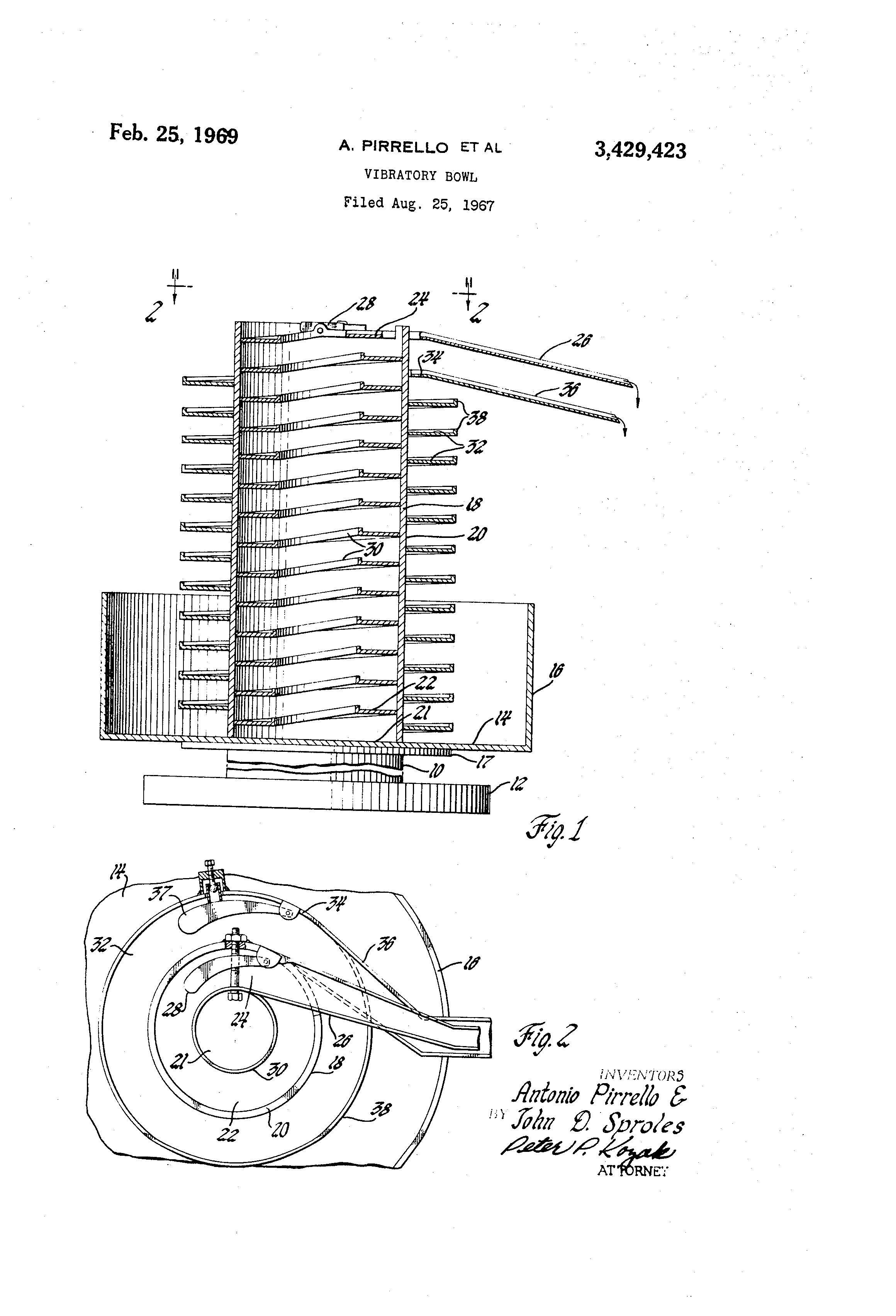 Another of Mr. Pirrello's inventions, the vibratory bowl.

The image of Pirrello's exhibit in the Museum of Roller Skates links to a story about him in the Chicago Tribune. 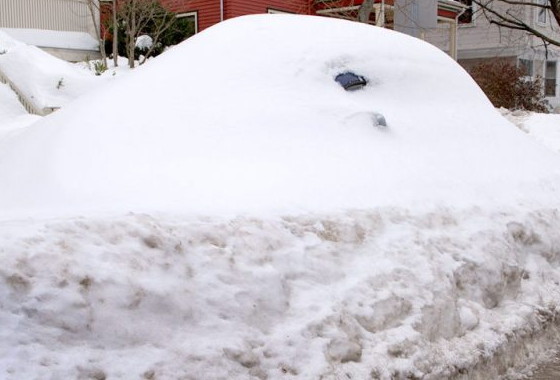 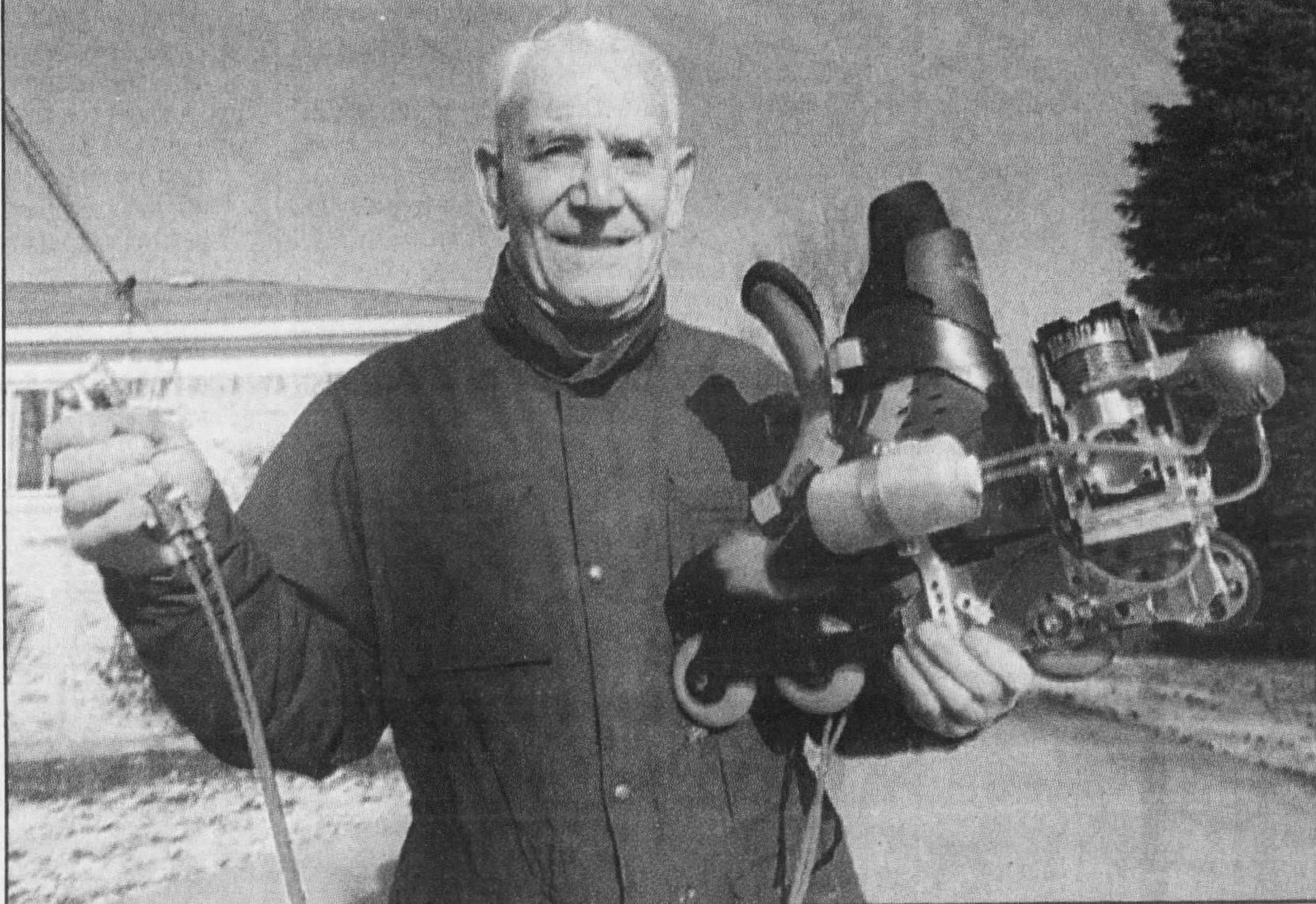 First page of an interview with Mr. Pirello in 1994. 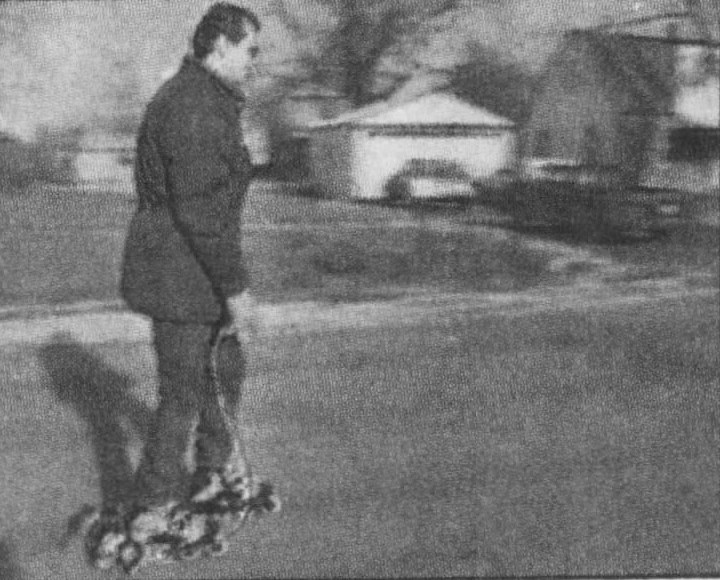 Second page of an interview with Mr. Pirello in 1994. 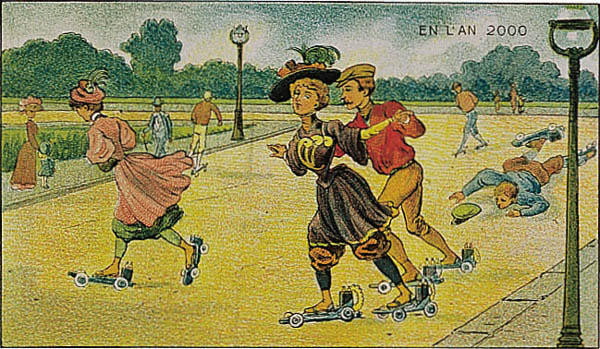 Who in the world cares about Motorized Skates?